As a New Zealander who had lived and worked many years in Europe, I have always been interested in New Zealand's contributions in both World Wars. When I made aliyah to Israel, I already knew about the ANZAC First World War contributions against the Ottoman Empire, and especially the liberation of Beer Sheva in 1917.

However, I was not prepared to find, on a visit to Rosh Hanikra, a New Zealand Army symbol on what was most likely a buttress on the bridge over the grottoes that supported the coastal railway to Beirut. I knew the railway was constructed in the Second World War but nothing of its history.

The bridge was destroyed by the Palmach 21st Battalion in February 1948, the sole purpose to disrupt shipment of arms and materiel to the Arab forces fighting the Israelis. Wikipedia tells us "The northern part of the coastal line from Acre (Akko) to Remez Junction (located south of today's Caesarea-Pardes Hanna Railway Station) was built by the British during the 1920s and operated by Palestine Railways. In 1941–42 engineers of the South African Army and New Zealand Army extended the line north to Beirut and Tripoli, Lebanon through railway tunnels at Rosh HaNikra grottoes."

More research led me to discover a book "The Desert Railway". Although published in 2003, copies are not easy to find with my favorite book sources. An exhaustive internet search finally found two copies in New Zealand and I was able to get one mailed to Israel. In this book I found that a New Zealand Railway Group was formed from volunteers in the New Zealand Railways to operate and maintain railway lines, originally in Europe. However, by the time they were assembled, trained and shipped out, their operating area became the Western Desert. As a specialized group they were not part of the New Zealand Division and an official war history has never been published. This book appears to be the only record of their achievements. 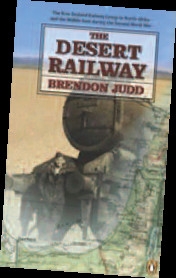 Most of the book details the Railway Group's efforts in maintaining tracks and equipment and services in the Western Desert where they effectively took over the operation of the lines from the Egyptians. This support was vital in providing supplies to the allied forces and the ultimate defeat of the Germans in North Africa. In total 40 officers and 1368 other ranks left New Zealand with the Railway Group.

Only one chapter, "Railway Construction in the Levant", deals with the Railway Group operations in what was then British Mandate Palestine. Apparently the intention was to extend the wide-gauge line that ran from the Canal Zone to Haifa along the coast to Beirut and ultimately to Tripoli (Lebanon). The thought was that a Middle East rail line could facilitate transport of supplies to Russia and relieve pressure on the Murmansk convoys. The book says two Railway Construction Companies, the 10th and 13th, were sent to work on the line in June 1942 but I believe from other sources that this is a misprint and should be 1941.The strength was 11 officers and 833 other ranks. The coastal tunnels were dug by a South African Tunneling Company which was comprised of men from the Witwatersrand gold mines. One of the Railway Construction Companies' tasks was lining the tunnels with precast concrete arches and beams. The concrete was mixed at the top of the cliffs and delivered by gravity down a flexible rubber hose. Most likely this was the source of the concrete for the buttress I found with the New Zealand Army symbol.

The two construction companies began by building marshaling yards by the village of Achziv and then continued laying track, building culverts, installing drainage, and station yards for the 87 miles of line from Haifa to Beirut.

Unfortunately, the book does not tell what happened to the men of these two companies after they finished the line in Beirut. Because of manpower shortages in New Zealand, a decision was taken to return the Railway Group to New Zealand. They left from Port Tewfik on June 15, 1943 and arrived home in New Zealand July 12, 1943. So ended their contribution to the war effort and they were assimilated back into the New Zealand Railways.

Living now in Nahariya, I can't help but think about the contribution these fellow Kiwis made during the Second World War, and I am saddened to think that the politics of the region has not allowed their railway line to remain in operation after their extensive efforts and hard work.