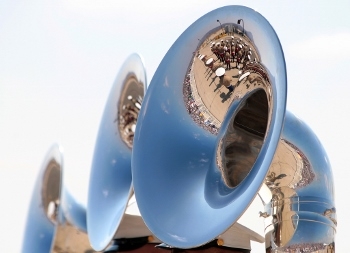 "Music that's Band" was the theme for the February meeting of this group of enthusiastic music lovers in Modiin who meet in private homes.

Music from military bands, the Royal Naval Volunteer Band and the Big Band era of the 30s and 40s, entertained the foot-tapping audience.

Added to the mix was an impromptu piece from the members of the Philadelphia Orchestra who had been passengers on a plane that had been delayed for three hours on the Beijing tarmac. What better way to entertain the passengers than to give an impromptu performance, much to the delight of everyone. It was recorded on many iPads and iPhones, as can be seen from the footage. No doubt all those who find themselves in a similar situation would wish to while away the time with such a performance.

A whimsical piece created by Rainer Hersch, pianist, conductor and comedian, using the sounds from the Microsoft Windows program on our computers, produced a waltz with the Philharmonic Orchestra at the Royal Festival Hall, London. This gave the orchestra as much fun and lightheartedness as those who listened and watched the video clip.

An interval for light refreshments added to the social occasion.