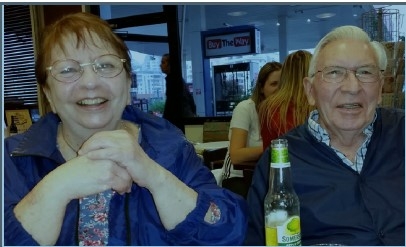 Beryl was born on October 27, 1940 to the family Juter in Cape Town. She married Geofery Baleson and they came on aliyah with two young daughters in 1977. Her husband, who was working at Teva Pharmaceuticals, passed away in 1982. She brought up her two daughters alone until they were able to fend for themselves.

I met Beryl in 1987 and when we decided to get together, I was always accepted by both her daughters and their families. We remained together until her death.

Beryl was highly talented. She worked at Tel Aviv University for Professor Dinstein, first when he was dean and later president of the university with a huge congregation of professors at the Faculty of Law. She typed their messages and avoided terrible mistakes in broken English.

She was an expert in Genealogy and came into contact with the authorities in Lithuania, who supplied her with a huge amount of information that she pieced together and wrote a book, which included thousands of names of closely related families. She worked closely with the Yuter family of New York, and her work was published jointly with Elinor Yuter. She was very friendly with Sy and Elinor and visited with them. Both families, Juter and Yuter, shared a single ancient ancestor. It was no easy task to find the connection. She set about it and solved a difficult problem.

She also contributed to the books of the Sandlers of Perth, Australia. Sandler was well known in South Africa and was educated in Arcadia Orphanage. His books are widely distributed and include Beryl's contributions.

Her research also found a family of mine, right here as close as Rishon leTzion. And we visited and made contact together with them.

There is much more that I could say about Beryl but will suffice to say that she is dearly missed and will long be remembered.

Her talents were passed on to her two daughters, and both have made huge successes in their lives.

I owe them, Shirley and Toni and their families, a huge debt of gratitude. They have always accepted me and treated me as an intimate member of their families, for which I am extremely grateful. I love them very much.