A day out with ESRA's Social Club for Disabled Young Adults

n 1963, four young men burst onto the music scene taking the UK by storm, and repeating the exercise a year later in the USA, with fans whipped up to a frenzy by their appearance on the Ed Sullivan Show. The boys from Liverpool, calling themselves The Beatles (of all things!), became a worldwide sensation, and Beatlemania was born.

Close to 60 years later, Beatlemania is still a thing!

The Holon Children's Museum (which is equally engaging for adults) has an entire, very hands-on and interactive, exhibit devoted to the Beatles. This was the excellent choice of venue for the annual end of year trip for ESRA's Kfar Shmaryahu Social Club for disabled young adults.

Our convoy of six wheelchair-bound participants and several ambulatory ones, along with accompanying parents, carers, and volunteers, made their way from the parking lot, across a bridge over the museum complex, and patiently up and down small elevators, one chair at a time, to arrive at our destination. No one complained. Excitement was high.

Entering a space covered with Beatles memorabilia, posters, wall-size floor-to-ceiling photos, and glass-enclosed displays of endless numbers of Beatles albums, we were first treated to a short film about the iconic band. Our group members were clearly familiar with the songs and enjoying every minute.

Next we were divided into smaller groups making interaction easier, each group with its own guide. Ours was a vivacious young woman who danced along to every Beatles song she played for us, encouraging us to sing and clap along as well and adding to the fun. She introduced the group to a strange mechanism called a record player… and demonstrated how it plays a thing called a record. The young adults were amazed. Some of us dinosaurs were still familiar with the concept.

We were introduced to the various instruments played by the Beatles, and got a chance to try them out. The history of the group, their quirks and talents, were all presented, with some of our young participants showing exceptional knowledge of who the Beatles were, where they came from, and what they were individually known for.

The members of the Social Club, despite their severe disabilities, were game to try things out. When invited to go up on the stage (with ramp access), don a Beatles costume and become the Beatles for the length of a song, they did it. For some, just maneuvering themselves onto the stool behind the drums was a major physical exercise. One young woman was determined to try out the keyboard. Repeated attempts, with great effort and concentration to direct her hand, finally resulted in her eliciting some notes. This was met with enthusiastic applause by all those around her, accompanied by her own satisfied smiles.

For those privileged to be unafflicted by disabilities, it can be difficult, even heartbreaking, to watch. But it is also inspiring. When these young adults are together in a group, they accept each other and the fact that this is simply their reality, and they can appreciate each other's achievements. So too do those who work and volunteer with the group, getting to know them and their world.

ESRA established the Social Club with the understanding that young adults with handicaps need social activities with peers just as much as any young person. However, the handicapped often find themselves socially isolated, lacking a suitable framework for their needs, and that isolation greatly exacerbates whatever problems they are already coping with. The Club offers the participants a social framework, reducing their isolation and providing them with the opportunity to develop social skills through weekly meetings, activities, and special events. 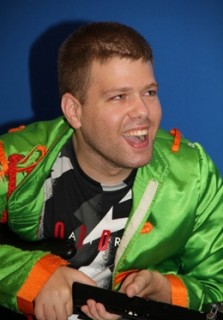 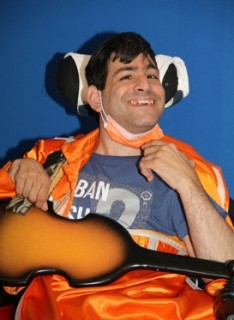 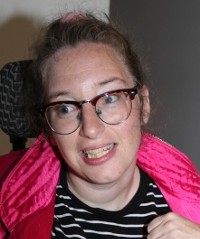 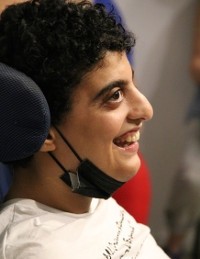 The Social Club has been meeting weekly at the Kfar Shmaryahu Community Center since 1999, and some of the participants have been coming from the beginning. The Club is blessed with wonderful volunteers such as Inge David. Inge has been with the Club for many years and is already an iconic part of it. Aside from accompanying them on every trip and activity, she provides the participants with a weekly exercise session, displaying energy not often seen in a nonagenarian. Leslie Hennen is another long-term volunteer with the group, which he too attends with dedication and love. Tal Mizrachi is the group's charming professional coordinator. She efficiently oversees all activities and the wellbeing of the participants. In addition, each year two to four students of Behavioral Science from the Ruppin Academic Center volunteer with the group, injecting lively energy, organizing activities, adding to the participants' feeling of being seen, related to and accepted, and adding to the students' understanding of living with disability.

This past year, dealing with the challenge of COVID, activities were conducted via Zoom, with just a few face-to-face meetings in open spaces, such as a trip to Park Raanana. Resuming physical meetings is this year's plan and is enthusiastically looked forward to by the group members.

Funded by ESRA and its donors, the project's biggest expense is transportation. The participants are picked up from home and returned for every meeting and event, which requires special wheelchair-accessible vehicles with lifts. This investment is so very appreciated by these young adults who are enabled to get out and about and interact with others, and that makes it so well worthwhile. There is an open invitation for anyone to come and visit the group in Kfar Shmaryahu, or join them on a special event, as we did. The reward is learning to see beyond appearances, to the mind within, the will, the determination, and the heart inside.

For more information about the Kfar Shmaryahu Social Club: ….. 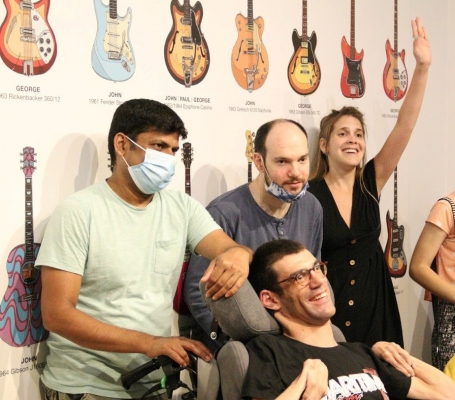 Volunteers, carers, and the group’s young adults, all equally enjoyed a day’s emersion in the music and memories of the Beatles.
Tags:
Social Club Disabled Young Adults
PRINT