Oct 13 Posted by ESRAmagazine in February 2015 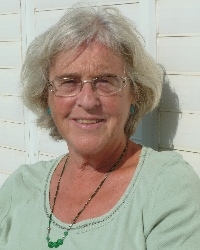 Barbara Lyons was born in London on June 29, 1939, second daughter of Regina and Sidney Sanders and was very proud that she still had the invoice from the nursing home, showing that her Mother's stay there cost £5 for the week!

Her family moved to Harpenden for the war, but once the war ended they returned to Hampstead Garden suburb in London.

She studied quantity surveying at the Regent Street Polytechnic College, but then we met which was the beginning of the end of her studies. We were married in 1961, and Barbara continued working in different offices of quantity surveyors.

Once she started having children, Mark in 1963, Sidney in 1965, Samantha in 1967, and Nicole in 1969, things started to get rather busy but she continued working and also worked from home.

In 1971 she joined the 35s which was the year it had been founded. She had already been friendly with some of the founders, so for her, the rest was easy.

Barbara threw herself into the activities with all her boundless energy. She would often say that it was only luck which had brought her grandparents to England whilst others had stayed behind.

She felt it her duty to help those who were left behind in the Soviet Union.

At this stage working for the 35s was taking up all Barbara's time. Whether it was preparing for another demonstration or actually going on a demonstration – life was the 35s.

And then it was discovered that Barbara was a dab hand at making banners – for the demonstrations – or anything else.

At first these were done free hand by Barbara in our kitchen, but as demand increased, Barbara got one and then more sets of stencils. Our dining room was now a banner factory and whatever Barbara was asked to do, she just said – yes.

Never heard Barbara say no or maybe, when she was asked to do something.

In the early 1970's a group in the area thought it would be a good idea to raise funds, and bring 30 wounded IDF soldiers to England for two weeks, host them with different families and take the soldiers on day trips to various places. In the evenings, different entertainments were offered.

We hosted a soldier who had lost his right arm – below the elbow, and had some kind of rudimentary prosthetic. We were not certain as to how to refer to this arm. Certainly food had to be cut into small pieces. One day we came home to find the soldier and our 4-year-old daughter in the bath together – and any sort of embarrassment over the soldier's "potato arm" as it became known had gone.

A few year's later Barbara and a friend who had been an Israeli war widow and subsequently remarried a Brit, thought that having hosted the IDF wounded, it would be a good idea to host groups of Israeli war widows. This they did, but the widows proved more difficult than the wounded soldiers.

In 1979, just before the Iranian hostage crisis, there was an arrangement to bring 100 boys from Iran for a very short stay in England. Once in England the U.S. authorities had promised to issue visas for these boys within a matter of days, and then the boys would fly off to the U.S.

Obviously families would be needed to host these boys during their very short stay in England, and as there were not sufficient families for all the boys, Barbara said that we would host two boys.

So it was – till the hostage crisis issue. The visas were withheld at that time, and the two boys stayed with us for over six weeks before the matter was sorted out.

In 1980 Barbara, together with her very good friend Sue Usisikin, went to Moscow to meet the refuseniks they had been working so hard for.

From the moment they boarded the Aeroflot plane in London till their return, they were certainly aware of the presence of the KGB. While they were visiting a family the KGB came and arrested some other people who were also visiting. Quite a shock to the system.

…and then in December 1981 we came on aliyah to what turned out to be a very cold snowy absorption center at Mevasseret Zion. Ulpan every morning to try to learn some Ivrit.

We stayed there till June 1982 when we moved to a flat in Ramat Hasharon. It took time to adjust to living and eventually for Barbara to working here.

At this period ESRA was just getting going and we went to many of the quiz suppers and other activities that were being held, and also began to be involved in the organization.

Barbara was at this stage working in personnel with Nat Gordon at the Marksman Agency. Since she dealt solely with English speaking people, her Hebrew did not improve, but she did get to meet so many different people.

As the years progressed, and Barbara retired, she devoted far more time to volunteering for ESRA. Every Wednesday morning she was in the office in Raanana, as well as being the co-chairman of ESRA Herzliya.

Her camera went with her wherever she went, and she became ESRA's unofficial photographer and archivist. She also did administrative work for ESRAmagazine and its website and became an outstanding source of photos for the magazine.

Apart from Barbara's interpersonal skills where she was able to mix with all sorts of different groups of people, she also had her artistic side. She made many pieces of pottery either by hand or on the wheel, and her love of knitting was very well known. Her latest effort was put into knitting dolls of various sorts and sizes, and then filling them with wadding so that we have a wonderful collection of such dolls at home.

Probably her greatest achievement was her role as "Grandma". She was always running from one to another of our Israeli families. Helping out with the children, teaching them English – so that all the elder grandchildren in Israel are fluent in English. Even the children of our friends called Barbara – "Grandma".

Our English grandchildren did not lose out either, as Barbara always kept in contact with them by Skype or FaceTime. At least twice a week she would call to learn how they were.

In May 2014 Barbara did not feel well, and went to our family doctor. Various tests, and she was eventually told she had pancreatic cancer. She did have chemotherapy, but whilst this was effective on the tumor, it was not good for Barbara.

She bore her illness with remarkable fortitude, even telling one person how lucky she was to have such good friends who were helping her.

Barbara is so missed.

Neil Lyons passed away in the summer of 2015

Barbara was a member of our Herzliya [and other locales] bookclub for many years. She was a gracious hostess and when we had our meetings at her home, they were often held on the upstairs patio.

In one of our selections, The Hare with Amber Eyes by Edmund de Waal, the author traced his family's tragic history through a collection of Japanese netsukes.

We held the meeting at her house because Barbara had a surprise for us – she showed us HER collection of ivory netsukes, tiny hand-carved figurines of people and animals.

She told us that the collection had belonged to her father, an engineer, who had worked in London.

Whenever he received his salary he would go to a nearby antique shop and purchase one new netsuke.

She always came to meetings prepared with relevant study questions for the book under discussion – a very useful tactic when our conversations drifted away from the book.

Barbara's hands were never idle; she was always knitting socks, sweaters or clever reversible dolls for her grandchildren, and she always had a word of advice for those of us knitters who were less skilled than she was.

She was modest about her major contributions to the 35s – a group of strong and admirable women in the UK who undertook to publicize the plight of Soviet Jewry, and she was a tireless and cheerful volunteer at many of ESRA's activities.

During the past year, when she and her husband, Neil, became ill, the mutual concern and support that always defined them as a couple became even more obvious.

At our November 2014 meeting we paid tribute to this lovely lady who touched our lives in her humble and cheerful way. 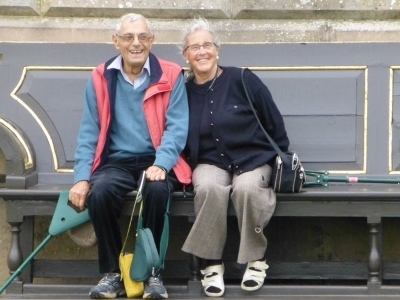 Barbara's passing has caused a big gap in our Discussion Group. Her quiet sense of humor, her calm input, her talent in the kitchen, not to mention her amazing store of knitting patterns, old theater programs and other memorabilia, and her more recent connections with her Polish roots, were important additions to our get-togethers. She was special and is irreplaceable.

Barbara and Neil have been part of our group – a band of five couples, all British, who met up some 30 years ago when we were all new immigrants to Israel.

Every month, for all this time, we have got together, rotating hosts and leaders for a myriad of topics covering every subject under the sun. We started as an informal support group and have become the closest of friends, and our meetings are practically sacrosanct.

At least once a year we have a weekend away together, discovering and enjoying Eretz Yisrael.

We have shared joy and sadness, supporting Sandra when her husband Michael died, and just as the group re-gathered then, so will we now with Neil. Barbara coped with her 'last journey' with fortitude and dignity.

Dear Barbara, you will always be in our thoughts.

Whenever I think of Barbara Lyons, I think of a good, kind, thoughtful and lovely lady who always had a friendly smile on her face, a lady whom it was a privilege to know.

A number of years ago she was invited to the Golden Friendship Club to tell us about her beautiful dolls.

She brought a suitcase full of gorgeous dolls which she had made and for which she had knitted the most stunning outfits. We were all full of "oohs" and "aahs" and admiration as she showed off her wonderful talent.

Barbara was a very special person and her death leaves a deep hole which will not so easily be filled.

Dear friend Barbara, we miss you very much.