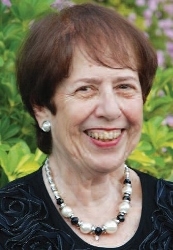 Audrey Goodman ... a no-nonsense activist, an inspiration to her family and an outstanding leader

Our mother, "mom" as we called her, also known as Savta Audrey to her 14 adoring grandchildren, as Audrey to her good friends, or as Aviva to her Israeli Sabra friends and acquaintances, had a thoroughly pragmatic approach to life.

Always encouraging us to make the best of even seemingly difficult circumstances, Mom fought a valiant, courageous battle with leukemia, fielding phone calls from her bed at Assuta Hospital until the evening before her passing on November 4, 2014. Long-time ESRA volunteer and outstanding leader, our mother, has left us at the age of 81.

Born in Decatur, Illinois, on October 7, 1933 to Emanuel and Hannah Rosenberg, Audrey's father was a prominent lawyer in this not so atypical Norman Rockwell-like small town.

Before Audrey was born, they had a son, William, who died aged five from pneumonia before penicillin was widely available. The Rosenbergs were also parents to Elaine, Audrey's sole sibling. Elaine, 85, lives today in Tucson, Arizona, with her husband of 61 years, Harold Lisberg, 90.

Elaine recounts that Audrey was the first Jewish teenager in Decatur to join high school sorority and break "the Jewish barrier." She also recruited her cousins, Judy and Alice, together with Elaine to the cause, thereby creating the gang of four that became known as the 'Rosenberg Girls'.

This may seem insignificant today but during the 'Silent Generation', this was no laughing matter for those children whose parents had fought in WWII, started the Civil Rights movement, and were then excluded as Jews from country clubs and a host of other fraternal organizations in America.

Audrey graduated high school at age 17 and it was during the first of two back-to-back National Federation of Temple Youth summer camp sessions in Michigan that she met her one and only beshert, Richard (Mordechai) Merle Goodman.

They danced to the music of Nat King Cole's "Unforgettable" and "Too Young" and fell in love forever. The marriage was a Camelot fairy-tale come true and lasted 34 years until May 6, 1989 when Professor Richard M Goodman MD OBM passed away at Tel Ha-Shomer Hospital, Israel.

In 1951, Audrey attended the University of Illinois for two years and then completed her undergraduate studies at Northwestern University where in 1955, aged 21, she graduated with a BA in Political Science. The couple had three sons to whom Audrey was devoted.

Daniel, married to Orly, lives in Los Angeles - parents to six children and one grandson.

David, married to Shira, lives in Bet Shemesh - parents to four children and one granddaughter.

Audrey worked behind the scenes helping her husband organize, collate and edit medical and non-medical books, and genetic reviews. She also performed administrative work for Keren HaYishuv (Rothschild Foundation), Department of Family Medicine at Tel Aviv University, and was also part of the team to establish the Open University.

Audrey travelled widely/extensively and was a passionate patron of the arts, including the Tel Aviv Philharmonic and the Opera. She served as the family event photographer extraordinaire and was a no-nonsense political activist, writing to newspapers when she felt something was unjust or in order to give kudos for unsung heroes.

And then there were her brownies, strudel and chocolate chip cookies. But most of all there was her constant, unconditional love for family. She attended every family celebration, and there were many, travelling locally and abroad, to Yerucham, Beit Shemesh and California.

We, her sons, wish to thank the devoted staff at Beth Protea and the amazing healthcare professionals at Assuta Hospital for their help and care until Mom's passing.

Our mother was a giver and she will be missed immensely but not ever forgotten. Her memory remains a blessing and inspiration, now and always.

Leukemia fund launched in her memory

Donations in Audrey's memory can be made to ESRA for the Audrey Goodman Leukemia Fund. To make a donation: mail your check to ESRA, POB 3132, Herzliya; Tel: 09 950 8371; Fax: 09 954 3781; email This email address is being protected from spambots. You need JavaScript enabled to view it. or online at www.esra.org.il. Please state that it is for Audrey's Fund.

The tea box that brings back happy memories

I first met Audrey about 25years ago when we struck up a conversation while waiting around to have our cars washed.

It took awhile before we became friends, as in most matters of concern to her, Audrey was very circumspect. Especially then, when as fairly recent widow she was working out the 'how to' in charting a new course for her life. And how she did! Her situation then seemed to have triggered a vast reserve of creative energies.

From that period, until recent times when she became ill, the ESRA community has been enriched through her input, activities and projects she was able to initiate and organize.

One of her first very successful projects she launched was a wonderful monthly lecture series in Ramat Hasharon, where she was then living. On the days of the lectures I and others had to hurry to Beit Malinov early, in order to assure finding an empty seat, and those of us who regularly attended, eagerly awaited the next months talk.

And the same was true for the wonderful Film Club she initiated in Raanana. Someone directly connected to the film was always there to talk about the film after the viewing. This series was no grade B material. Audrey made certain there was something to be learned from these films, especially about various aspects of life in Israel,that we the viewers might never have known about.

She was cultural chairperson, and I believe her behind the scene input into the many and varied ESRA meetings that took place regularly were keenly heard and often implemented.

Audrey was blessed with a large devoted family. With three sons, thirteen grandchildren, four great grandchildren and a sister with her family abroad, there were always on going family events and celebrations to be part of, and she was. She seemed to have time for everybody and everything, Myself, and other friends became acquainted with her family largely through the lens of her camera. She was good with the camera and so enjoyed sharing those family events she was so often a part of. It didn't matter where they took place, Beit Shemesh, Yeruham, Los Angeles, Tuscon, Albania, she was there.

My friendship with Audrey had me thinking a lot about friendship in general. Not only was Audrey a thinker, but she most subtly encouraged it in others, myself included.

Without saying a word about it she had an uncanny knack of letting you know what her parameters were, even in friendship, which for her were most definitely, common interests, mutual respect, and maintaining her privacy, and that is how it was.

She liked to have fun and had on occasion a spontaneous side to her. One day, browsing together in a gift store, we spotted a lovely decorated box, which, when opened, revealed a divided interior. I commented that it would make a "good tea box" We continued to spend some more time in the shop browsing and I did not notice that Audrey had gone to the cash register. Outside the shop she handed me the package, commenting that 'it was for me'.

Since that time, which was already many years ago, this lovely box sits on the buffet in our dining area. Audrey and many others have had their moment of being able to 'pick their tea, and drink 'a cup of' here.

I have always loved this box, but for me now it is much more than a tea box, it is a memory box Audrey, for that moment of spontaneity, for many wonderful shared and interesting conversations after discussing in length on the phone 'where shall we meet'? over the years, for your friendship and ,YEAH - for enabling me, to, on occasion, 'think outside the box'.

Warm and gracious, even in hotly contested games of bridge!

When Audrey Goodman passed away on November 4, 2014, many of us lost a dear friend and ESRA lost an exceptionally dedicated volunteer.

Audrey left us and left ESRA in a way that typified her life. She left quietly and with dignity and even at the end of her life she managed to accomplish things that were important to her. She marshalled her strength to attend the Brit Mila of her fourth great grandchild surrounded and supported by her loving family and she efficiently "cleared her desk at ESRA". She transferred her many responsibilities in ESRA to others, capable volunteers whom she trusted to continue the ESRA programs that she had initiated and run so well.

Audrey was a remarkable woman—intelligent and gracious, an independent thinker who understood the significance of issues that confronted her and who was ready to state her views no matter how much they might differ from more popular majority opinions. She was warm and gracious, even in hotly contested games of her beloved Bridge. She related to others in an open, honest and sincere manner and she was a friend one could count on.

Dear Audrey, we shall miss you very much.

Debby Lieberman is a former Chairperson of ESRA

Working out of a small office, Audrey undertook so many different roles

I had the privilege of knowing and working together with Audrey as a volunteer in ESRA for nearly 20 years. We met when we both participated in an ESRA training course for future leadership– and the rest is history!

Audrey was a born leader and an amazing organizer who set herself a very high standard and expected the same of everybody with whom she worked. As a result everything that she undertook was successful. At the beginning of 2000 we became co-chairs of ESRA working out of the small room in the Hanadiv office. In all that time we had a really good working relationship, with each of us knowing our strengths and weaknesses. From that period on she undertook so many different roles within ESRA that it is hard to remember them all. Recently she undertook the running of the ESRA College together with the Raanana Municipality, which is hugely successful thanks to her dedication. She also set up a cinema club and single handedly choose the documentaries and arranged for the film directors to speak after the film was shown. In addition, Audrey was the chairperson, for many years, of the Program committee, and built up a group of people, under her leadership, that organizes all the programs that you see advertised.

It will be very hard for ESRA to find anyone with her competence to take over her many positions. She will be sorely missed by all her friends and colleagues and staff of ESRA.

May she rest in peace.