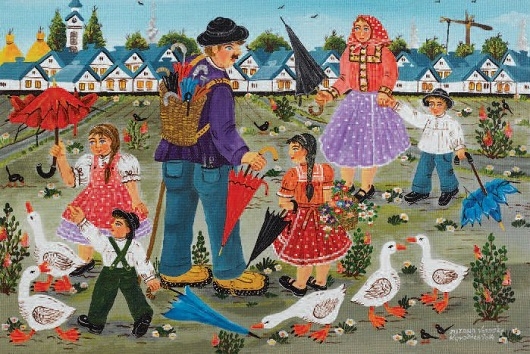 It has to be admitted that there's not too much current art that can be described as heart-warming. Interesting? Yes. Challenging? Maybe that too; but heart-warming? Well – not really so much.

Yet, there is a genre of art that fulfills that criterion for many people, and certainly for this writer, and for that reason, top of my list of galleries to visit was the GINA Gallery in Tel Aviv's Dizengoff Street.

The Gallery of International Naive Art offers an entrée into an  innocent, idealized world of vibrant, heart-warming color, brimming with human detail in its physical, environmental context. The differences between the ancestry of the artists of Brazil and Argentina are boldly evident in the current exhibition ending May 27.

A Garden of Eden-like tropical rain forest and the world of nature proffer the glowing backdrops to the simple Brazilian figures, and clearly evoke an African influence. A more sophisticated environment of cafes, patisseries, markets and buildings accompanies the elaborately dressed characters peopling the Argentinian works. These are redolent of a European flavor reminding us that it is not for nothing that Buenos Aires is referred to as the Paris of South America.

While Latin America and Brazil in particular are well known sources of naive art, other countries also provide this genre albeit in a variety of styles. In addition, some artists are influenced by other genres, such as impressionism or surrealism.

Indeed, when asked to define naive art succinctly, GINA founder and CEO, Dan Chill, delightedly proclaims: "It is timeless in that it celebrates the human narrative." He explains that naive artists often capture their scenes in "a loving, punctilious detail to make life appear beautiful and special." He also refers to the art as "childlike in scale and perspective - as opposed to childish." This is certainly not a 'warts and all' exposé of the world! 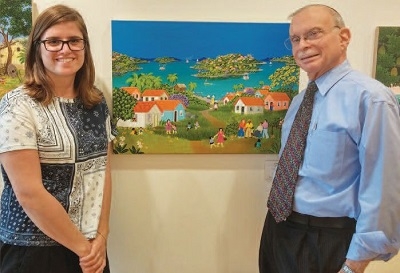 Whilst naive art has existed since the time of cave paintings, it came to prominence in the modern world in the late 19th century, Dan explains. It was derided by the art establishment as 'primitive' art executed by outsiders who had not received a classical art training. The practitioners are usually self-taught and prefer the term 'naive', as the art and its perspective portray the worldview of a naive person with an idealized view of the world while the artists are proud that they are self-taught.

His absolute passion for naive art is revealed as Dan relates:"Each brush-stroke is a song of their hearts that, when finished, is transferred to the viewer." Although Dan has an Art Director (Natalie Tiznenko) and executive assistants in the gallery, he curates the exhibitions himself. He is the person who flies around the world to meet and regularly revisit the artists to secure their works for the GINA gallery. Not surprisingly, he is proud to advise that it is the only such international gallery collection in the world apart from museums and public galleries.

How did someone without an art background, a former international lawyer and graduate of Harvard Law School, who had worked since his 1974 aliyah in the top echelons of commercial law for Israel Aircraft Industries, the Eisenberg Group, and more latterly Indigo Digital Press, come to open a gallery of naive art in a "leap of faith" in 2003?

It was while on a trip concluding negotiations in Honduras 35 years ago with IAI's future president and CEO Moshe Keret that Dan noticed opposite their hotel "a beautiful little gallery of paintings that beckoned me". They warmed his heart and spoke to him such that he brought one home and put it on his wall. That led to his seeking out artists in all the countries he visited for work, and resulted in a personal collection of more than 40 works of naive art "built in a relatively amateurish way" adorning the walls at home. 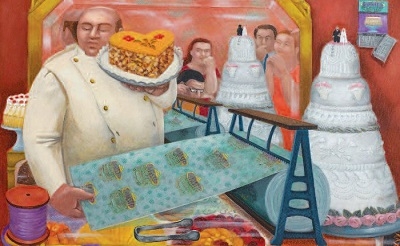 He realized he was "onto something" when visitors started exclaiming over the art and saying how much they loved it. His wife and lifelong sweetheart, Abby, head of social studies at the American International School, also appreciates "most" of the paintings.

He first met Abby, then five, daughter of Rabbi Dr. Louis C. Gerstein of the Spanish and Portuguese Synagogue in Manhattan, when he started school in New York. Being friendly with her brother, it seems that his aesthetic eye showed early promise as he was very taken with an award winning photograph of her, and the three became strong friends.

However, Dan's earlier childhood was spent in a still nascent Miami Beach where his refugee father and Sabra mother settled in 1940 after marrying in Jerusalem in 1935, as his mother's family had lived in Israel for many generations since 1809. But he and his sister Ophra were tragically orphaned when he was eight and were taken in by his aunt's family in New York after his parents were killed in a car crash which the children survived.

Regular visits to Dan's mother's family in Israel meant that, after the couple's marriage and Israeli honeymoon in 1968,they came for a six months' trial period in 1971 and then made aliyah in 1975, giving up lucrative careers. Yet they have not looked back and have made successful lives here with three, now equally successful, married children - Jordan, Caleb and Henry, and 11 grandchildren.

Dan is still a man with a mission and has a vision for the future of the gallery and for naive art. He would like some "angels" with deep pockets to come along and open up similar galleries in other cities such as New York, London and Paris, so that the world's perception of naive art can change and enable it to join the other art establishment "isms" such as impressionism, surrealism, cubism. "I hope that one day people will realize that they no longer love sharks in formaldehyde or dogs made of balloons, but love something that makes their hearts sing," sighs Dan.

GINA gallery enjoys a high rate of footfall and sales, with at least one painting sold per day. Art gift certificates can be bought and a painting can even be added to a wedding list so that family and friends can contribute towards a chosen artwork. Sponsorship of the beautifully produced annual catalogues is also welcome.

Do they make good investments? "It depends on the choice of artist, your eye, experience and the right advice," says Dan. "It is the same with every art genre. Some works have increased in value by an amazing amount. One I bought 30 years ago for $200 is now worth $28,000, but of course that is not every painting. Paintings range from $200 to $2,000 and are sold with a certificate of authenticity."

Next up in the late summer is an exhibition drawn from northern European countries entitled "Northern Lights".Early 2017 provides the rare prospect of an exhibition of naive art from China where farmer artists are sponsored by the government. Samples of these prove that there is a constant that runs through the genre, but that each country adds its own flavor provided by the context and variety of styles.

GINA is a gem. I came away delighted by the display, with a smile on my face and a spring in my step.