Are You Heir to ‘Abandoned Property’? 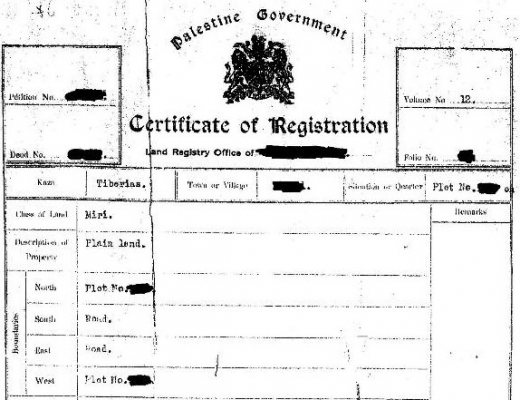 An historic Title Registration dating back to the 1920's

An historic Title Registration dating back to the 1920's

A few years ago, I got a call from a client who had received a strange letter from the State of Israel. This letter informed him that the State believed him to be the heir of a relative, who owned property in Israel, which the State was managing and asked him to write back explaining the family connection to this long deceased relative. The client was concerned that the letter was a scam, or something out of a Kafka novel. Could it be that the Israeli Ministry of Justice would contact him about the "abandoned property" of a relative whom he had never met? This was just the first of a series of cases, in which I've had the privilege of assisting clients in claiming and releasing "abandoned property".

The idea that property can be lost or abandoned is odd in itself. After all, it is not like that wayward sock that never emerges from the laundry, to make a pair. It is a physical place with title documents and registration. The first question then, is what is "abandoned property"? Section 1 of the Administrator General Law - 1978 defines "abandoned property" as property for which the owner cannot be found or is unknown. There are many avenues that could lead to an owner losing connection with an Israeli property, leading to a designation of "abandoned property". The path that keeps appearing in recent cases is connected with the history of land sales in Mandate Palestine.

In the 1920's and 1930's there were a number of organizations actively buying land in Mandate Palestine, including the Jewish National Fund, the American Zion Commonwealth (AMZIC) and private individuals, like Prof. Otto Warburg. AMZIC and Prof. Warburg purchased large tracts of lands and then sold smaller parcels of 1 – 20 dunams to Americans, who wanted to be part of the creation of a Jewish homeland. These Americans had no intention of moving to Palestine or farming the land. It's likely that some of them saw this as taking part in the Zionist enterprise, while others may have also viewed it as shrewd real estate investing.

These American buyers received title at the time of purchase and were registered as owners with the "Palestine Government Land Registry Office". The Land Registry at that time was managed by the British and the entries were handwritten, in English. Some buyers kept the title documents; the purchase was a source of pride within the family. Other buyers may have forgotten about this, or assumed the purchase had so little value that they didn't keep the records. Often, the knowledge and the information about the purchase of land was lost when the original purchaser passed away. 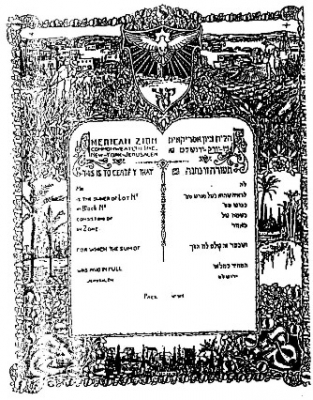 After the creation of the State, the parcels of land sold via AMZIC and private investors were duly registered in the Israel Land Registry. Over the course of time, the land was often reparcelized and legally identified with different block and parcel numbers. In some instances, parcels of land that were originally purchased, for example, as 5 dunams, were reparcelized into smaller 1 dunam units and that original owner, who bought 5 dunams in 1925 may currently be registered as the owner of 5 separate parcels of land, each of 1 dunam, with completely different block and parcel numbers. These are just examples of the many changes that might have occurred over the years.

The State of Israel does have a government office that handles these properties, called "The Unit for Location and Restitution of Unclaimed Property". Over the years, the details of such "abandoned properties" could have reached the Unit from municipalities looking to rezone areas, building contractors interested in purchasing and unable to locate the current owners or the Israel Land Registry itself. The Unit maintains a lengthy list of over 17,000 names of "absentee" owners. This list includes both people who own real estate and monies, such as forgotten bank accounts.

If there might be a piece of land in your family history, you can start by searching the nit's list to see if your ancestor's name is on it. Keep in mind that the people on this list are those for whom the State has obtained a court "management order". There are still properties out there, owned by "absentee" owners, which are not under management order and the owners name WOULD NOT be on this list. It is also noteworthy that you CANNOT search the records of the Israel Land Registry using a name. That search only works with a Block and Parcel number.

Finding a relative's name on the list is only the start of a lengthy process to claim and release the property. This process includes proving your connection to the relative on the list, which is no easy feat, considering the relative is often long deceased and records may be hard to come by. The Unit also requires that you obtain an Israeli probate order stating that you are an heir (under Israeli law), or a beneficiary under a will (even if the Will was made in the US and probated there fifty years ago). Often there are many rightful heirs or beneficiaries that have passed away after that original purchaser and I've handled cases with multiple probate orders in the chain of inheritance, which all have to be submitted to the Unit as part of the proof of the current heir's claim to the property.

Part of the Unit's duties is to attempt to locate the rightful heirs of the absentee owners and return the property to them. There are some lucky clients who have received letters from this Unit, but the Unit is understaffed relative to the number of missing persons and their searches are limited in scope. There are many potential heirs out there who will not get such a letter and will have to be more proactive if they believe that there is a parcel of land in their family history.

It is a long process indeed, but some people find the metaphoric deed in the attic and succeed in claiming and releasing the land that their Zionistic ancestors bought in in pre-State Israel

*This article is intended for general information only. There is a great deal more to know about this situation before filing for release of a property and every case is unique.