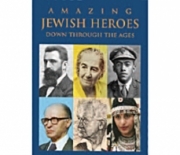 Some of these stories make you gasp for breath as you put down the book – for example the story of Felix Zandman who, for nearly a year and a half, lives in a small hole under a building, together with three other Jews hiding from the Nazis.After the war Zandman, against all odds, goes on to become a world leader and innovator in physics.

As I get older I find it harder than ever to accept that people would stoop to such horrifying and senseless crimes as the mass slaughter of people.But in this book, as well as in today's newspapers, these crimes are there for all to read. Less well known, however, is the story of the great courage displayed by the people who overcome such odds.

Another story is about Golda Meir who, already at the age of fourteen, says: "Only those who dare, who have the courage to dream, can really accomplish anything."Only after her death at the age of eighty (four years after leaving her position as prime minister) do we discover that she had been suffering from leukemia for more than twelve years.

Similar stories of Jewish heroes facing adversity bring home the fact that great men and women will carry on against all odds – even to the extent of endangering their own lives.

Goldberg calls the Jewish heroes either by their first names: "David" or "our hero" (David Ben-Gurion), or occasionally "our tough old Golda" or "our Menahem", but this familiarity in the treatment of his subjects is really an insignificant complaint.

One feels that there are other heroes who could have been written about (Yitzhak Rabin comes to mind), but it becomes clear that there are more Jewish heroes in the world than one realizes.This could be food for thought for another, more comprehensive, tome.

The book is written in an easy, flowing style, making it eminently suitable for younger readers as well.