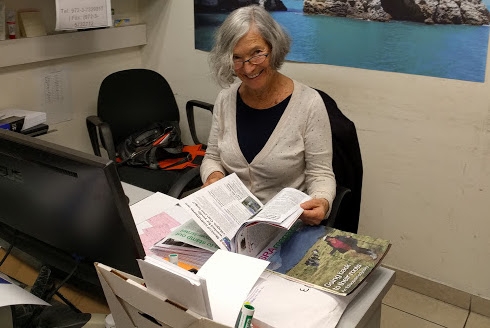 We long for a human touch, empathy and compassion for those less fortunate or strangers who reside in our midst. Here and there we find pockets of Israelis who care about their neighbor, but above all do something about it. In this issue. Yedidim, Friends of the Road, is a group of volunteers, who offer road assistance and other emergency services to those in need, 24 hours a day except on Shabbat and holidays.

Beit Uri is a home in the hills for life for the severely developmentally challenged, who, despite their difficulties, are blessed with a chance to live as normally as possible. Kuchinate (which means crochet in Tigrinya, a Semitic language spoken by people in Eritrea and Ethiopia), is a psychosocial project empowering asylum-seeking women, many of whom have survived torture, sexual abuse and human trafficking, to sit together and create household object - baskets, poufs and rugs. Karmei Katif, on the West Bank, is populated by Jews who were evicted in 2006 from Gush Katif and who have made major efforts to rehabilitate themselves, such as Uri Jonah who is partners in a vineyard which employs Palestinians to harvest the grapes and students to carry the crates. In the poem Not Me we are confronted with the outcry of an Ethiopian: "I'm officially Jewish. But because my skin is black I'm not one of you." Sara Rabani wrote the poem at least four years ago, and sadly it is still relevant today.

Freedom Farm is a sanctuary for animals from the meat, dairy and egg industries. It serves as an educational center that sensitizes children and emotionally renews adults. Youngsters meet animals who are recovering from physical and emotional trauma, and they learn to associate the compassion they feel with events in their own lives, such as bullying, illness, or a situation where "someone who's different" needs help.

Israel's youth are spearheading an active and leading role in an endeavor to save our environment They have grown disillusioned with the lack of action displayed by their parents' generation and are thinking of ways not only of awakening our leaders to the imminent dangers posed by society's lack of interest and inaction, but also looking for ways in which they can physically make a difference. We feature two articles: Strike for the Future is an Israeli movement initiated on March 14, 2019 by a group of high school students who recognized the need to raise awareness in our country. They hold demonstrations in Jerusalem and Tel Aviv following in the path of the now 120-country-strong international Friday movement calling for action and change. In addition to striking from school on Fridays to hold demonstrations, the group organizes rallies and has formulated a range of initiatives such as proposing a "Green Course" subject in schools. Activists meet youth from the north to the south of the country, speak at youth movement events, set up sites on social media, hold marches and field operations, write to MKs, and demonstrate in front of the Knesset and municipalities. Myra Olswang's granddaughters took on the problem of plastic bags being handed out in their local grocery store. They salvaged worn-out sheets that were about to be discarded, cut them up to size and using a simple sewing machine they sewed a large pile of bright and colorful carrier bags which they put in their local grocery store for shoppers to use and re-use when shopping for their daily groceries. The shoppers were so keen to continue with the project that they happily contributed bags to the collection for the general use of anyone needing to carry home their groceries. You too can do your bit to save our environment.

I am continuously inspired and invigorated by ESRA's volunteers. Lolita Marcos has volunteered since Israel's inception 40 years ago. She has helped in any way we have asked her. But more than that – she created two funfairs for ESRA in Herzliya and was a past chairperson. Renee Goldway too was a past chairperson of ESRA. Together with her late husband Michael they created the ESRA College which is still running successfully today. They also organized outstanding outings, and Renee gave a platform to numerous immigrant musicians from the Former Soviet Union so that they could perform to ESRA audiences and earn much-needed income. Inge David shares with us a poem she wrote recently on living with the reality of being 90, feelings and she is a living example of how to keep going actively and positively. On that score, you might like to start painting – read how Donald Silverberg got into painting at a late age, and just loves it.

There are people with tremendous courage. Michael Elroy, a transgender man, spoke recently to ESRA Haifa about his trans life, and has lectured in Israel and in the U.S. to many groups of people, schools and businesses. He wants understanding and people to know what it's all about. It is fascinating to read the story of Zvi Brenner, an unassuming man who never sought glory, but did what was asked of him and stood by those who went on to shape the nascent State. His life reflects the panoply of Israel's struggle for rebirth. New Mexico too has a population of "Secret Jews" which you can read about in this issue. And if you know little about the Jews from Libya, it is worth visiting the outstanding museum in Or Yehuda, dedicated to the history and culture of the Libyan Jews. Or Yehuda grew out of a maabara where many Libyan Jews were settled in 1949-1951. Dementia is unfortunately occupying the lives of too many families. There is a helpful article on the dementia journey: the signs, symptoms and how to help.

Other interesting reads are: downsizing for those who are thinking of moving; the romance of Dietrich and Chevalier; recalling the time of helping harvest bananas in 1966 on Kibbutz Beit Haemek; barge-sailing on the Caldon Canal with grandkids; sailing alone on the South Pacific Ocean; knitting woollies in England for the soldiers during World War II, and many more. Please buy tickets for ESRA's annual fundraiser, this time with Danny Sanderson and his band presenting his repertoire of Israel's all-time favorite hits. Volunteer as a tutor of English, or if you live in Herzliya and the environs there are many other volunteer opportunities. Of course, for pleasure and leisure, ESRA offers a wide range of activities which you can find on our pages of Future Events and Social and Interest Groups.