In 2016, after a life-time of refusal, I decided that the time had finally come to explore my parental heritage and embark on a roots trip to Germany, where my parents were born and raised. My father and mother were German-Jewish refugees who reached safe haven in Canada in 1939, three months before the outbreak of the War and obviously just in time. I was raised in a German-speaking home. In fact, German was my sister's and my first language until we went to school, where we learned English.

The Holocaust was the dark cloud that hung over us as we matured. Strongly influenced by my mother, I learned to shun everything and everyone who was German and for good reason. She was virtually the sole survivor in her family. In the case of my father, all the members of his family experienced the horrors of the Holocaust, aside from an elder brother, his wife, and their two young sons who all immigrated together with my parents to Canada. Some of my father's family, who remained in Europe, did survive. Others did not.

For me as a child growing up, a trip to Germany was completely inconceivable – totally out of the question!!! I would never go there under any circumstances!!

This attitude began to change in 2015 when I was returning to Israel from Montreal where I had been visiting my younger son. Beside me on the plane sat a man, Thomas Höppner-Kopf who, as it turned out was a Protestant minister. It was my uninterrupted and unprecedented four hour conversation with him that ultimately convinced me, at least, to begin considering a roots trip as a serious possibility. He absolutely insisted that I should take this long overdue step.

After exchanging email addresses he subsequently put me into contact with a non-Jewish woman friend, Gabriele (Gabi) Hannah, who has dedicated her life to research in Jewish genealogy and specifically to the preservation of the memories of Jewish victims of the Holocaust. It was her generous and devoted efforts, generously rendered, and one of which was to establish contact with specific persons who would serve as our hosts and guides in Germany, that, in the final analysis, made the trip feasible and resulted in an overwhelmingly emotional experience for both me, as well as my sons.

Our adventure commenced in Heinsberg , a small town of about 40,000 inhabitants, an hour's drive from Düsseldorf and the ancestral childhood home of my mother. There, as pre-arranged by Gabi, we were greeted by the town's deputy mayor, who served as our official host. Later we were joined and guided to the various sites by the town's chief historian and archivist. The attention paid to us as well as their generous hospitality left us with no doubt that they related to our visit as an event, bearing considerable significance and meaning.

its population evacuated. Consequently, nothing was remaining of the house on Apfelstrasse 33 where the Schwarz family (although unrelated, my mother's maiden surname was identical to that of my father's) of eleven individuals resided. Nor were there any remnants of the Jewish community's synagogue other than a plaque on the present-day building where the synagogue once stood.

November 9 -10 1938 will be remembered as the infamous Kristallnacht when Nazi hordes rampaged throughout Germany and Austria, setting synagogues ablaze, and ravaging Jewish cemeteries. Sadly, neither Heinsberg's synagogue nor the Jewish cemetery, (where my grandfather, Joseph, after whom I'm named, and Johanna, one of his sisters, were buried), was spared this atrocity. Both were destroyed. In the case of the synagogue, as the mob began to assemble, the town's fire chief was summoned to appear in front of the building, without fire-extinguishing equipment and ordered to set the building ablaze. He was reported to have responded that his function was to extinguish fires and not ignite them. Needless to say, his reluctance to act was ignored.

Today, the site of the cemetery is well-tended, almost resembling a garden with quite an impressive monument erected to commemorate the memories of those who are interred there. It seemed obvious to us that the site has been given considerable attention and consistent care. In later years seven grave stones were discovered and erected in a semi –circle with the memorial in the middle.

Although lacking the required quorum of 10 men, I decided that under the extenuating circumstances I would allow myself to recite the Kaddish prayer. We also lit memorial candles and placed stones which we had brought from Israel on the memorial. For me, as well as for my sons and perhaps the people accompanying us, it was a most moving, even tearful moment, and will not be forgotten. 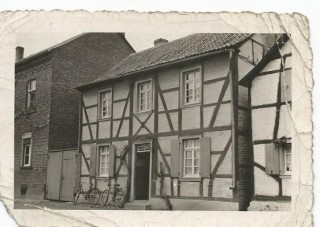 My father’s childhood home in Mueddersheim around 1939 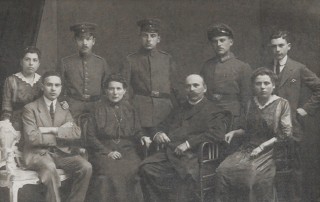 My father, (centre) in WW1 army uniform with parents and six siblings

Our second destination was the small village of Müddersheim, about an hour's drive away where my father and his six siblings were raised. Except for those members who immigrated to Canada in 1939, all of the other family members left Germany for Holland a year earlier, hoping that they would remain safe there. Unfortunately, this was not to be. All of them experienced the horrors and cruelties of the concentration camps; but miraculously, with the exception of three, they survived.

Müddersheim remained untouched by allied bombing during the Second World War. Of the several places we visited, three are of particular significance - the Schwarz ancestral home, still standing but in total disrepair, a section of the former synagogue, now a carpentry shop, located in the nearby village of Lüxheim and the cemetery, situated in an isolated spot in a forest on the outskirts of Gladbach, also close by. Here, only members of the Schwarz family who died before the War are buried.

We were most fortunate to be accompanied by our knowledgeable guide who lived in the region, was very familiar with the history of the former Jewish presence and had prepared our itinerary. In the village itself we were joined by Antonius von Gehr, the 68-year old grandson of Baron Friedrich-Carl von Gehr, patriarch of the aristocratic family. Having established friendship with my grandfather, Jonas, many years before the Nazis came to power, Friedrich-Carl continued to maintain close relations with our family while the latter were still residing in Germany. It was now Antonius, his grandson who had requested to meet us and was most eager to do so.

The special relationship of the Gehr family with ours and indeed their generosity is clearly evident in their decision, many generations ago, to donate a small plot of land to the Schwarz family, to serve as a cemetery, exclusively for them. Amongst the seven grave sites, the oldest is that of my great grandfather, Philip Marcus Schwarz who was buried there in 1886. The fenced–off enclosure, near the village of Gladach, is almost totally inaccessible. It is located in a dense forest on a small parcel of land.

It is reasonable to assume that the rationale behind the decision to establish the cemetery on that particular spot, so isolated and hidden away, was to protect it from potential future vandals. In this it was quite successful, as even the Nazis were unaware of its existence. It has, in fact, remained unmolested to this very day. 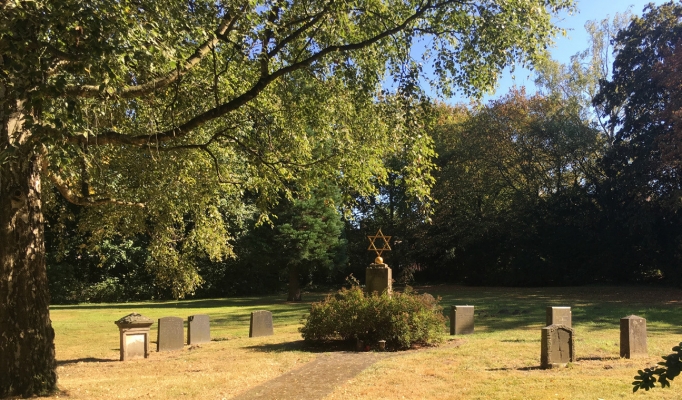 The Jewish cemetery in Heinsberg today

As in Heinsberg, here too, we lit candles, placed stones on the seven grave-sites and recited the kaddish prayer, quite possibly for the first time since 1938. Our guide confessed to us afterwards how deeply moved he was witnessing this stirring and perhaps, for all of us, unforgettable moment.

Accompanied by Antonius we reached our next destination, the Schwarz ancestral home, still intact, but in a derelict and dilapidated condition. This was even more evident as we entered the house. We quickly realized that its ramshackle status on the outside was equaled by its pitifully run-down interior. However, this was not always the case as explained to us by an 80+ year old villager whose family knew and was befriended with ours. He described the Tudor style house as quite a luxurious structure, constructed with long wooden beams and furnished with the best furniture and tiled with tiles imported from abroad. In fact, the Schwarz family was quite affluent before the Nazis came to power. They were apparently the first villagers to be connected to electricity, to have a telephone, and to possess a car. All of this attested to their wealth.

He also emphasized the fact that the family was highly respected by their neighbors. During the last days when they were, more or less, confined to their house by the Nazis, the former would bring them food and other essentials. When Nazi hooligans were on the prowl, they would warn them and instruct them to hide amongst the cows in their barn, situated at the back of their property.

From this impressive house, my grandfather and his five sons would proudly walk each Shabbat one hour to the nearby village of Lüxheim where the synagogue was located. It, too, fell victim to the carnage of Kristallnacht in November 1938 as a large section of it was destroyed. Other than an alcove in the eastern wall, which obviously served as the place where the holy- ark containing the Torah scrolls was situated, there is nothing in the present-day building to suggest that it was once a synagogue.

What was left standing was purchased by a local family and eventually converted into a carpentry shop, now run by a 69-year old descendant whom we met and who was most eager and willing to talk to us. He proudly admitted that his family and others in the area were not anti-Semitic and displayed no hesitation in helping Jews during this horrendous period. And this they did at considerable risk to themselves and their safety. Perhaps this was the reason that he had no hesitation and, indeed, displayed enthusiasm for having been given the opportunity to meet and converse with us. His demeanor showed neither shame, nor anything that he should hide.

For the last leg of our journey we were graciously hosted by Thomas, the minister who had ignited the spark. Our trip to Germany was, indeed, a milestone, a once in a lifetime, emotional experience – filled with much content and meaning. And this was so, not merely because of the sites that we visited, but also thanks to the people who accompanied us and whom we met. They, without doubt, belong to a small cadre of unique individuals, fully dedicated to preserving and honoring the memory of the Jewish victims of the Holocaust. All in all, it was an event that I could never have envisioned; nor would it probably ever have taken place, had I not met a Protestant minister from Germany on an airplane flying to Israel. 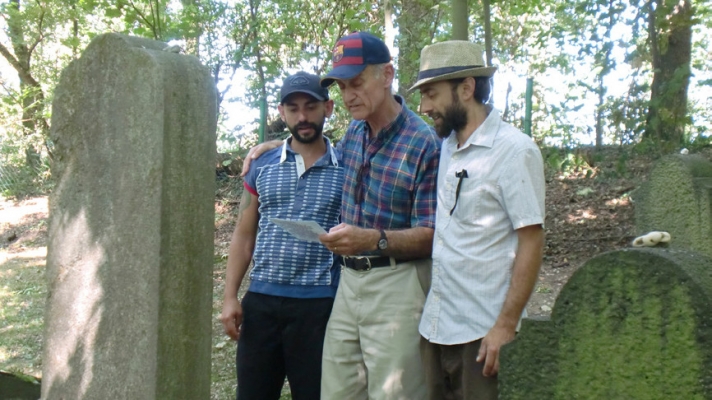