A Life of Giving 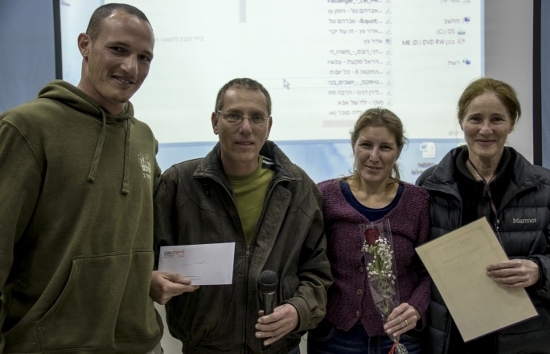 Chaim Segal with Michael, Susan and Heidi – children of the late Shirley Kirsch Photos by: Mike Altman and Galia Peled

ESRA recently staged a moving evening to say THANK YOU to the generous donors of scholarships for our Students Build a Community Projects in Netanya.

The annual Scholarship Award Event was held on Wednesday, December 23, 2015 at the Hefzibah Community Center. In attendance were our wonderful donors including representatives of many ESRA branches from far and wide, as well as friends and well-wishers from all over the country.

This year, twelve students from the Students Build A Community Projects in Netanya received scholarships because they volunteered for an additional 120 hours of special contribution to the communities in Hephzibah, Kiryat Nordau, Sela and Neot Shaked.

Esti Zerihon, who was sponsored in memory of Vera Faiman 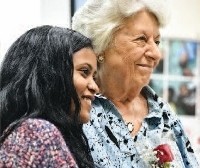 Nina Zuck, ESRA Projects Director, welcomed all and emotionally introduced the donors to the scholarship recipients. Some very warm and immediate bonding was in evidence between the students and their sponsors as can be seen in the heartwarming photos from the evening.

Two Certificates of Appreciation were also given to Judy and Amnon Argaman and Janice Gaines for their contributions to these projects.

Brenda Katten, ESRA Co-Chairperson, closed the evening with words and thoughts of inspiration to all.

Zehava Yamana, who is working with a group of teenagers in the Center for Youth at Risk in Nordau to provide activities and enrichment for those who have dropped out of school and have no other framework. Zehava's scholarship was presented by Bryna Franklin in memory of her friend Ann Sculley Williams. 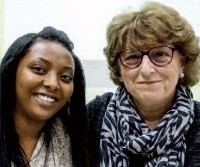 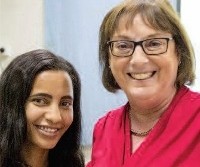 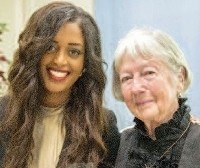 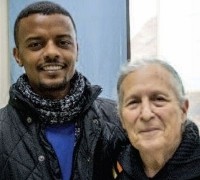 Sara Alemo, who is partnering Zehava at the Center for Youth at Risk in Nordau. Her scholarship was presented by Irene Stohn on behalf of The Kirshner Fund.

Avital Mekone, who will run a series of workshops throughout the year for 5th & 6th grade girls, preparing them for Junior High School. The workshops are on friendship, hygiene, sex education, etc. Avital is starting with eight girls and hopes to get more to come. Her scholarship was presented by Ilse Gluckstadt in memory of her father, Leo Gluckstadt.

Tzlil , who is starting a new program in the Sela neighborhood together with a group of young arts education students. They will open an afternoon clubhouse for the kids, providing activities and enrichment.

Malka Yaakov, who will be working in ESRA's Amharic & Modern Dance group. She will accompany the girls from Hefzibah to Neot Shaked where the group dances together with girls from Neot Shaked. She arranges the logistics, helps the teacher and makes sure the girls get home safely. Malka's scholarship was presented by Laurence Faiman in memory of his mother, Vera Faiman. 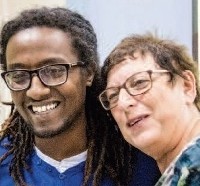 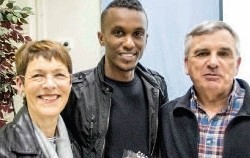 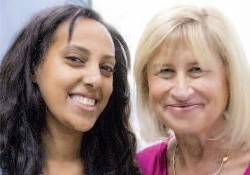 Esti Zerihon, who will be assisting the ESRA volunteers at Moreshet Zvulun School. Eight volunteers are helping 20 children from the Hefzibah neighborhood with their English in order to improve the standard. Esti arranges their lunch, helps during the lesson and makes sure the kids all get on the bus to go home after the lesson. Esti's scholarship was presented by Judy Samuels in memory of her mother,Vera Faiman.

Avi Teshuma, who has undertaken to help in the afternoon preschool in Hefzibah to prepare groups of children for first grade. He is sharing a scholarship in this project. Avi's scholarship was presented by Liz and Terry Morris on behalf of the Isaacs Fund in memory of Liz's parents, Rosemary and Teddy Isaacs from Sheffield, England.

Adisu Mekonen, who has been working for the past two years with his group of four children from the Rashi school. The project has this year moved to a new school, but Adisu very much wanted to complete the process he started with "his kids" two years ago. He has therefore undertaken to work with two more boys from the new Nordau school in addition to his four boys from the Rashi School. Adisu's scholarship was presented for the second year running by the ESRA Tel Aviv Branch in memory of their friend and member, Fran Flamholz.

Chaim Segal, who is in charge of a group of 18 kids in ESRA's Project of Excellence at the Michmoret Marine Science Institute. The kids are transported by bus under Chaim's supervision, from their schools to the Institute, given lunch and then a program of enrichment in marine sciences, ecology and leadership. Chaim's scholarship was donated by ESRA Tel Aviv Branch in memory of their friend and member, Shirley Kirsch.

Buntji Alamihu, who is in charge of the second group of 18 kids in ESRA's Project of Excellence at the Michmoret Marine Science Institute. The kids are transported by bus under Buntji's supervision from their schools to the Institute. Buntji's scholarship was presented by the ESRA Herzliya Branch in memory of their past chairperson, Barbara Lyons.

Jayjo Zero, who is sharing a scholarship with Avi and will be working at the same afternoon learning center. Jayjo's scholarship was presented by the ESRA Jordan Valley/Tiberias Branch.

Adi Barro, who is working in ESRA's Amharic and Modern Dance group. She accompanies the girls from Hefzibah to Neot Shaked where the group dances together with girls from Neot Shaked. She arranges the logistics, helps the teacher and makes sure the girls get home safely.

Adi's scholarship was presented by the ESRA Netanya Branch.