A Gift From the Shah to His Jewish Doctor 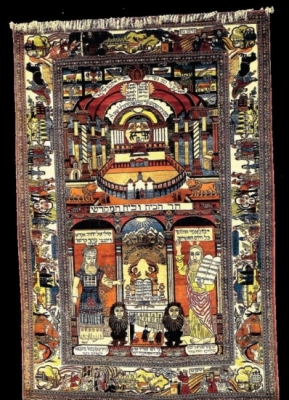 Some Jewish carpets, having been commissioned to celebrate or commemorate specific events, are unique. This fascinating silk carpet, now in the care of the Beth Tzedek Musuem in Toronto, was created at the command of Nasser e-Din, the Shah of Persia (1846-1896), as a gift to his Jewish doctor. Woven in the 1890s, its theme and high quality point to its having been made in one of the highly skilled Jewish workshops in Kashan.

This carpet blends traditional Iranian rug designs, Qajar elements, and rich material from the Hebrew Bible, Talmudic, and folk sources. It displays more Jewish imagery than I have yet seen on any other Jewish carpet. At the top of the central field, on either side of the Crown of the Torah and the Tablets of the Law, are the symbols of the twelve tribes of Israel, while below is the Temple. Two lions guard the Temple's ornamental gate, indicating contemporary Qajar influence, and the foreshortening creating a sense of perspective as the view recedes, indicates European influence. The two foremost pillars, Jachin and Boaz, are freestanding and barley-sugar shaped, the smaller columns take us right inside the Temple into the Holy of Holies and to the guardian angels protecting the Tablets of the Law.

In the bottom half, three arched arcades supported by four pillars denote the Temple space. In the central upper register, under the Sunburst, we see snow-capped Mount Ararat, and below are the Tablets of the Law and the guardian angels. In the lower register, protected on either side by a lion, are three Jews before an odd representation of the Western Wall. To the left, we see Aaron before the menorah, wearing his priestly bejewelled breastplate, and like Moses to the right, Aaron is barefooted. Moses holds the Tablet of the Law, horns of light radiating from his head.

The borders introduce us to other critically important Biblical events: Abraham is about to sacrifice Isaac; Joseph is about to be sold by his brothers into slavery; Elijah is ascending to heaven; Moses is being discovered by Pharaoh's daughter in the bulrushes; Noah stands with his three sons before his ark; and in the four corners, we see the tombs of Rachel and three of the patriarchs. The borders are unusual in that the figures on both vertical sides face inwards and are identical.

This carpet was presented by the Shah of Persia to his Jewish doctor, Hakim Nour Mahmood, to honor Mahmood's survival after an attempted assassination by his envious colleagues. Hacham Yedidia Shofet, the former Chief Rabbi of Persia, who had moved to Los Angeles after the fall of the Shah, recounted the full story. It had all the qualities of a fairy tale – yet it is true.

In the second half of the 19th century there were many Jews, skilled in natural medicine, which traveled around Iran practising as doctors. They would be called Hakim, Persian for doctor, and one of them was Hakim Nour Mahmood. He was in his mid-30s when he decided to leave Kashan and settle in the capital city, Tehran. En route, he stopped off at the Islamic holy city of Qum where he saw a huge crowd of mourners bearing a body to a shrine in the main square. He was told that this was the funeral of the Grand Ayatollah's pregnant daughter who had died that day during a visit to the public baths. Nour Mahmood sought out the Ayatollah, and introducing himself as a visiting hakim, sought and obtained permission to examine the corpse.

Suspecting that the young woman was in a state of suspended animation, he aspirated her abdominal cavity, thus reducing the abnormal accumulation of fluid. She revived and recovered.

The Ayatollah, overjoyed, issued an edict barring any of the followers of the Prophet from ever harming any Jew. After the celebrations, Hakim Nour Mahmood continued his journey to Tehran. There, his fame had preceded him and he was invited by the court to join the other doctors to the Shah.

The years passed and Nour Mahmood became so favored by the Shah that his jealous colleagues tried to assassinate him. Suffering stab wounds to his stomach, he fought them off and escaped to his rooms where his son, Ayoub, stitched them up.

The Shah was delighted. The miscreants were punished and Hakim Nour Mahmood was lauded in the court, in the state, and in the media papers as a true and loyal servant of the Shah.

This carpet speaks of earlier times in the life of the Jews of Iran; times not always plagued with pogroms and persecution, but a time when a Grand Ayatollah would decree that Jews must be protected and a time when the highest state authorities welcomed the skills and contributions of the Jews of Persia.