A Bit of Humor 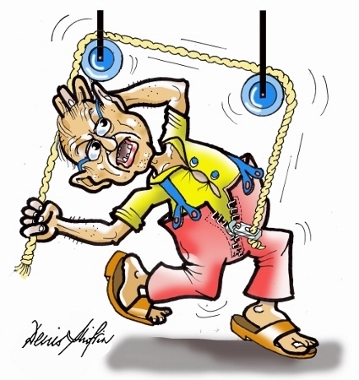 How's this for a ripping yarn?

A successful businessman parked his brand-new Porsche in front of his office so his colleagues could see it. As he stepped out of the new car, a truck passed too close and ripped off the door on the driver's side. A bystander dialed 911 and within a few minutes a policeman arrived. Before the officer could ask any questions, the business man began screaming hysterically that his new Porsche was now completely totaled. It was only after a half hour of ranting that the officer was able to talk to the man. I can't believe how materialistic you are, the police officer said. You are so focused on your possessions that you don't notice anything else. The businessman was clearly offended: How can you say such a thing? The policeman replied: Don't you know that your left arm is missing from the elbow down? It must have been torn off by that truck. My God!" screamed the man. My Rolex!

I have CDO. It's like OCD, but the letters are in alphabetical order, like they are supposed to be.

Wife puts her wealthy husband in the frame . . . literally!

A lawyer is talking to his client, a wealthy CEO: I have good news and bad news. The CEO replies: I've had an awful day, let's hear the good news first. The lawyer explains: Your wife invested $20,000 in five pictures that are worth a minimum of $2 million. The CEO replies enthusiastically: Well done, that is very good news indeed! You've made my day; now what is the bad news? Answers the lawyer: They are pictures of you in bed with your secretary.

As I entered the elevator at our hospital, a disheveled-looking man rushed in behind me carrying a ceramic blue baby bootie filled with carnations. I smiled knowingly and asked, Does he look like you? I hope not, he said. I just deliver flowers.

A weeping woman bursts into her hypnotherapist's office and declares, Doctor, I have been faithful to my husband for 15 years, but yesterday I broke that trust and had an affair! The guilt is killing me. I just want to forget that it ever happened! The hypnotherapist shakes his head. Not again …

Escalators don't break down … they just turn into stairs..

I intend to live forever or die trying.

We never knew he was a drunk until he showed up to work sober.

A clear conscience is usually the sign of a bad memory.

A blind man walks into a bar… and a table, and a chair.

At what age is it appropriate to tell my dog that he's adopted?

Want to hear a pizza joke. Nah, it's too cheesy.

What about a construction joke? Oh never mind, I'm still working on that one.

Did you hear the one about the rope? Skip it.

I used to be in a band. We were called 'lost dog'. You probably saw our posters.

I childproofed the house … but they still get in!

In the hardware store, a clerk asked, "Can I help you find anything?" "How about my misspent youth," joked my husband. The clerk shot back, "We keep that in the back, between world peace and winning lottery tickets.

The China National Tourism Administration has created tips for its citizens when traveling abroad, including:

■Don't steal life vests from airplanes to give as gifts.

■Don't leave footprints on the toilet.

■Don't dry your underwear on lampshades.