As you know, Israel is a very small country in area, roughly the size of New Jersey, with a similar long, narrow shape. Recently Michal and I went on a tour with the ESRA group to a northern part of the Negev Desert in Israel's south.

Our destination was Talmei Yosef, a moshav located about 105 km south of Tel Aviv. communities.)

Talmei Yosef was founded and developed in the Sinai Peninsula, which Israel had conquered in the 1967 Six Day War against Egypt (and other Arab countries). But in 1979, three years after a peace treaty was agreed upon between Egypt and Israel, the moshav was uprooted and then re-established in the Negev Desert, very close to the Egyptian border and the Gaza Strip. It was named after a former director of the Land and Afforestation Department of the Jewish National Fund, Yosef Weitz. 'Joseph's Furrows in English)

What brought us to Talmei Yosef was -- the Salad Trail. In 2004 Uri Alon opened the eponymous educational farm. This was the main attraction of our tour, which was over an hour's bus ride from Israel's center. We expected to see how Israel's famous agricultural technologies allow many crops to grow in the desert soil and also hydroponically or above ground. We weren't disappointed.

The Salad Trail is a unique touch-and-taste farm where you can pick your own produce, enjoy a complete "senses" experience, and learn about Israeli agriculture. Alon says, "If you want to see how the real vegetables grow, and taste the best vegetables in the world, that's reason enough to come visit."

As a youth, Alon had dreams of being a farmer, which suited him perfectly to become a pioneer in the Sinai and subsequently the northern Negev. "This is the only farm with a professional tour," he says. "It's not only about coming here to pick vegetables but also to understand how they grow, learn about the environment and understand the agricultural innovations and technologies." On our tour we also learned about shmita, the biblical requirement to let the land rest every seven years. Not surprisingly, many ways have been found to ease the requirements of shmita. For example, Alon raises all his crops not in the ground, but on the ground in pots or planters suspended in the air, such as strawberries.

Up until the current pandemic era, the Salad Trail would host busloads of visitors. But its main audience had been the very successful Birthright program, which would send multiple buses daily to the farm, where the young visitors to Israel could roam the fields, pick, touch, taste, and learn about the fruits and vegetables they eat. Lately, he is more likely to have one bus load a day and some carloads of Israelis touring on their own. Alon hopes that once the pandemic abates, the entire area will be revitalized and Salad Trail will again host corporate events, family tours, barmitzvahs, and school outings. 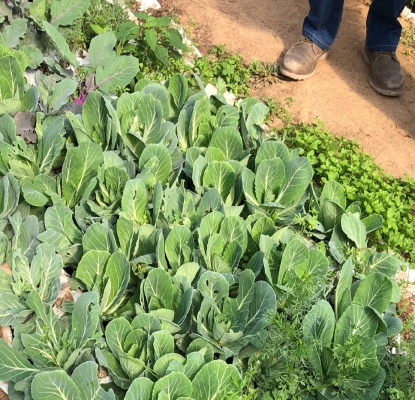 Like most farmers in Israel, Alon became an expert in strategies developed to mitigate the arid climate. He touts Israeli innovations including recycled water and irrigation technologies as key to his success in growing 80 different crops on his desert land, including more than a dozen varieties of cherry tomatoes, seven varieties of mint, edible flowers, four colors of carrots, two types of chili, two types of strawberries, three types of cucumbers, three kinds of radishes, more than 30 herbs, and more. We were encouraged to touch, smell, and taste the herbs grown on the farm, including medicinal varieties.

Alon has a very congenial way about him and cultivates an engaging rapport with his visitors, humorous while educational. He even employs recorded songs to enhance his presentation. His very smart and athletic border collie amused us with his wonderful tricks. Alon even raises carrier pigeons, also known as homing pigeons, which are bred and trained for their navigational skills. When released from their cages, they soar up and provide a wonderful photo op for visitors.

There was the option to bring your own lunch or enjoy a special meal at the farm. We chose the latter, a poike menu, either with chicken or without. It was delicious, similar to cholent - but better in my opinion.

What's a poike (pronounced poi-ke and spelled different ways)? Simply a Dutch oven - a three-legged, round, and heavy cauldron made of cast iron that contains dried sand, giving it additional strength and a smooth surface area. A poike is placed in a fire pit in the ground and the ingredients are slow-cooked for several hours. What differentiates a poike from a stew is that the contents of the cauldron are not stirred.

A couple who made aliyah from South Africa told us about the tradition of cooking a poike meal in the "old country," which easily fits the Israeli lifestyle. The 3–6-hour cooking method, which usually starts in early afternoon, is enhanced by a lot of beer drinking, including pouring some of one's own brew into the pot along with other ingredients. With the lid closed, the contents are left to simmer slowly. The aim is that the flavors of the different ingredients hardly mix. Little sauce or water is used, so that cooking is by steam, not boiling in a sauce like a stew; thus, the heat must be very low and constant.

After our very satisfying lunch and tour, we made one other stop at the nearby Isis Boutique Brewery. There, the engaging owner and a helper served us as much of his brews as we desired, while explaining and showing us his small operation. Though tiny by American standards, his brewery offers some tasty ales. He even distills some whiskeys, which he likens to "moonshine". His operation serves customers from the Northern Negev up to Ashdod, one of Israel's largest ports.

The brewery predates the ISIS terrorist organization, if you were wondering. It is named for the Egyptian goddess Isis, who became one of the most important deities of ancient Egypt. Her cult subsequently spread throughout the Roman Empire. She was believed to help the dead enter the afterlife and to protect the kingdom from its enemies, govern the skies and the natural world, and have power over fate itself. Wow! Isis was worshipped from England to Afghanistan and is even revered by pagans today.

Our tour to a northern Negev farm was very enjoyable and entertaining. While Michal and I haven't gone on many bus tours, this was a good experience, and we'll take advantage of more tours in the future. They are also an excellent suggestion for tourists planning a trip to Israel, who can check out attractions like this in advance on the many Israel touring websites.

For ESRA tours and other activities browse the website https://esra.org.il/social-culture/social-cultural-activities.html or call 09 950 8371