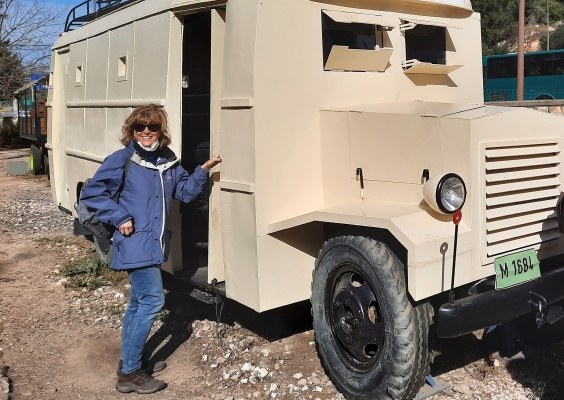 The last trip that ESRA Rehovot planned was to the Peres Center in Jaffa in March of 2020. We had two other outings planned for the spring of that year. They never happened. So it was with a large measure of trepidation that we began this fall to entertain the idea of reviving this aspect of our offerings to our members. We decided to start slowly, with a trip in private cars, and with the advent of Omicron, we were happy that we did so. The week before the outing, the ESRA Board debated postponing the tour, but decided to go ahead. Board member Helen Birnbaum had made the arrangements and had checked that both places were still receiving visitors.

It was a sunny and warm day in January, and 22 ESRA members met at the new Khan Shaar HaGai Museum at the beginning of the hills leading up to Jerusalem. All who travel Route 1 have seen the remains of an old Ottoman Khan on the right side of the road as they enter the narrow way up the hills. Now this building has been renovated and added on to and made into an interactive museum. The Khan was built around 1870 to serve pilgrims, travelers and immigrants traveling to Jerusalem. Before and during the War of Independence, this Khan marked the beginning of the dangerous section of the road for people trying to reach Jerusalem. The city was under siege from November 9, 1947 till July 18, 1948. The museum tells the story of the convoys trying to supply the city, and of the Jewish heroes of the historic events that occurred in attempts to lift the siege of Jerusalem.

The museum is an interactive one, and our English speaking guide gave us a short introduction and then shepherded us from one section to another. The first section was a film of people still alive, who had taken part in or helped plan different attempts to supply Jerusalem. Then we went to a section which had a number of stations. We were given problems that the fighters had encountered and had to decide how we would solve them. For example, how much food to put in a convoy, when what was also needed were weapons and ammunition and medicine. For example, if a truck in a convoy was attacked or blown up and blocked the road for others behind it, does the convoy turn back or try to move the truck while under fire from the enemy. Many of the problems had no correct answer, just one that was less bad than the others. We also experienced being in an armored truck in a convoy and coming under attack.

When we emerged from the other end of the museum building into the sunny valley we saw examples of vehicles that had been armorized and used in the convoys. These included trucks, an Egged bus and a mail truck. We could look inside and imagine how it felt to be driven 74 years ago.

After this fascinating but sobering experience, we continued on to our second stop in our outing. This was the Iza Priza goat farm in Moshav HaShahar, not far from Rehovot. There Mirav, our guide, gave us a fascinating talk about raising goats, behavior of billy goats and does, the life cycle of goats in family farms like theirs compared to large commercial farms, how much milk a goat gives compared to a cow, the different components of goat and cow milk, and what type of cheeses are made from goat milk. And then she gave us a demonstration of the steps involved in making Circassian cheese. At the end of the process she pointed to the arrangement of containers and instruments on the tables in front of us, and said that now we would each make a cheese. Since the cheese making process included 10 different steps, and since our short term memory has been blunted by age, more than one of us needed some prompting during the ensuing half hour. However, Mirav and two assistants passed out warm liters of milk to begin and circulated among us giving encouragement. We could elaborate on the basic recipe by adding various spices that they supplied as well. Once the cheeses were set in mesh buckets we left them to settle and went to visit the goats.

The farm has over 100 goats, all female does except for three or so billy goats. Most of the does are currently either pregnant or with kids. We visited an open sided barn where many of the females were and could pet one of the recently born kids, and feed the goats with acacia branches that Mirav supplied. There were beautiful chickens circulating freely in the barn. They ate the insects that might infest the goats. Once a neighbor's dog began regularly supplementing his food with a chicken or two, and the goat farm only realized that many chickens were missing when they found insect infestations on the goats.

After seeing where the milk for our cheeses came from, we retired to a visitor center where the farm had prepared a tasting table with bread, spreads, and cubes of different cheeses that they prepared along with a tea and coffee corner. There was a small store where we could buy cheese and other local products, and on a table by the door our cheeses were put in a container to take home. Mine was absolutely delicious.