ESRA Haifa Learns about a Project They Support 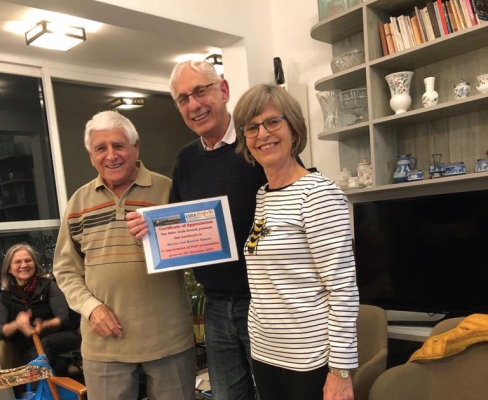 It was full house at the December meeting of the ESRA Haifa branch. Due to Covid the group had ceased meeting at its previous venue at Mercaz HaCarmel and had moved to more intimate gatherings in members` homes.

The guest speakers were veteran ESRA members, Marilyn and Maurice Hyman whose courage and resilience after a family tragedy had inspired them to establish a fund to benefit thousands of Israeli children.

Talia was the youngest of four children and the only daughter of the Hymans, immigrants from the UK. She was 21 in 2005 when she was killed in a car crash caused by a military ambulance swerving into the opposite lane resulting in a head-on-collision. During her school years she had struggled with learning difficulties and it took all her determination and support of her family to move on with her life, serve in the Army and start her studies in social work.

"Our struggle to help Talia progress through the education system made us aware that without the financial means to pay for additional remedial assistance and educational assessments, she would never have been able to achieve so much," says Maurice.

The community as well as the family were devastated by this tragedy and they rallied round when the Hymans decided to set up a Trust in Talia`s memory.

At the end of the 2019/20 school year there were 1,800,000 children in regular education, not counting Haredim or private institutions. "It is generally accepted that about 15% of all children have learning difficulties and need help.

"Each local education authority has a counseling service which is chronically under-staffed. There are 30% unfilled positions in education psychology due to low salaries which has forced many qualified practitioners to go into private practice.

In order for a school to apply for special conditions for a child to take bagrut, families have to pay between 3,000 and 6,000 shekels for a psycho-didactic assessment. Where the families are new immigrants often with other siblings, these costs mean a child dropping out of the education system with no alternative life choices.

Sixteen years after the Talia Trust was founded, with the focus on providing remedial teaching and assessments, they have managed to assist over 1,800 children at a total cost of nearly 2 million shekels. "Impressive for a nonprofit organization, but a drop in the ocean," says Maurice.

Marilyn continues: "We will help any child whom we are convinced needs our help' no matter what kind of school, ethnic or religious group.

The aim is to start at primary school level where the counselors decide which children need remedial help and recommend a suitable teacher to work with small groups to reinforce the material taught to the entire class…In middle and high schools, individual applications are made to us and we work together to find out more about the student and the family, even asking the student to write a letter about the reason for requesting assessment."

So where does ESRA Haifa come into this? The Talia Trust has been working with Kfar Hanoar HaDati at Kfar Hassidim since 2014. In 2016 at a joint meeting between the Talia Trust and ESRA, it was decided to teach a course of 20 lessons to two groups on learning strategies using actual subject matter. The benchmark for checking the success of this program would be the bagrut results which consistently improved after these courses.

"On the campus there are 460 children. The part of the school we are most asked to help is the original Youth Aliyah section," says Marilyn. "half the children there are boarders, mostly from the former Soviet Union".

Harry Hiller, Chairman of ESRA Haifa, described their follow-up visits to the school and attendance

at graduation ceremonies. "It was so inspiring to see the results," he said. "Our branch had contributed towards the education of students recommended by the Talia Trust, the ideal way of making sure that donations reach their target."

Indeed, the Talia Trust is entirely voluntary with no office overheads or salaries.

The Hymans work tirelessly with support from a wide community in Israel and the UK. "The need is so great," says Marilyn, "that we must recruit more volunteers and sources of donations from a wider population.